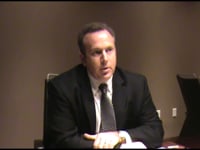 I’m pleased to announce that Jim has accepted and started his new position as CFO with XXXX, a large privately held non-profit. He is extremely excited about this position, as it positions him, not only the CFO title which he hadn’t previously held, but also additional responsibilities including leadership in both IT and all of Accounting.

Jim came to us through with a background in investments, transportation, and the non-profit and investment consulting industries. His challenge was in presenting himself well in interviews, especially because his exit from his last company was not very pleasant. He also had “blemish” from his recent past on his credit report, so he was concerned about whether that would pose an obstacle in his search.

He did his Phoenix Experience in early November, and said it was “eye opening” because he didn’t know what he didn’t know… he thought he had prepared enough until he got here when he realized how much better prepared he could be after going through our preparation and practice sessions. He also had had no experience with behavioral interviews, so he learned a great deal from his session with Bradford Wright.

He learned of XXXX’s need for a CFO through their CEO, a contact he had known for seven years because they were on the Board of another non-profit organization together. This was by no means a “slam dunk” however; he still went through a series of interviews with their company and we worked on how and when he would bring up his credit history in a candid way so that they wouldn’t be surprised when they did their background check. This ended up being a non-issue, as he received the offer.