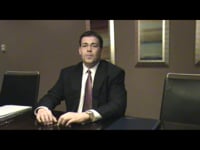 Relocating seven times —  annual travel exceeding 40 weeks per year – Enough Said!  Bob was asked by his company, to move again for an opportunity to do more of the same within the same business unit.   He felt it was time to take more control over his career and his life, and try to build a life that was more balanced with a wider scope of interest than just the company and job. As such, Bob negotiated an exit package from his company, and his company chose SC&C to handle his outplacement.

Bob had been promoted nicely during his 13 years with XXXX and, previously, he had been recruited to most positions preceding his engagements there. Throughout his career, he had never really had to look for work; it always seemed to find him. Given this fact, and now finding himself with little knowledge of how to properly execute a job search at his level, he found that he had to compete in a very constricted market with other senior Human Resource executives, and was honest enough to admit he did not really know what to do.

His Coach, Bill Temple, took him through a process of product branding to help him understand how he could differentiate himself from his competitors. They focused on his intellectual side (IQ), his behavioral side (EQ), and his historical side (HQ) to come up with a product definition that was clear, succinct, and easily communicated both in written, online and oral environments.

When he was properly branded, the next phase of the attack was to help him think through his targeting process to ensure that he was going after the right types and sizes of companies and to ensure that time he spent on the campaign implementation was not random and ill-defined.   In addition, Temple helped Bob learn how to use multiple channels simultaneously to communicate his value proposition to the right people, and how to communicate that value in both informational and actual interviews.

Finally, Temple taught Bob how to be aware of negotiation issues that could have kept him from getting an offer, and could have negatively impacted the value he received once an offer was presented. He and Bill worked through the entire interview process with each interview series so that Bill could provide feedback and experienced-based insights as to the potential motivations and underlying nuances of the employment situation that Bob might not “see” for being too intimately tied to the outcome – a job.

Throughout his 6-month campaign, Bob tapped into Bill’s expertise, and landed a SVP-HR role with a first year employment package that topped $1.8 million, all in.